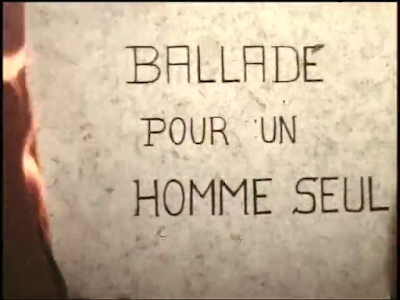 Minor, in comparison to Soukaz's later works, and formally this was clearly before he came to terms with the cinematic radicalism that would define his oeuvre, but here, in his first film, there's still something worthwhile to be found. If you watch the film as a film about a body in movement (rather than about homosexuality or ecology—which Soukaz's own account of the film seems to imply?) it becomes radiant and immediately calls to mind the linguistic contrast of the title, a contrast that Soukaz is so great at evoking throughout his entire body of work: "loneliness" is not something purely dejected, rather it should be viewed more as a joyful sort of freedom. This is conceptually radical in its own right, and more indicative of what was to come than anything happening aesthetically, but it still feels more like a mere piece of the puzzle rather than anything masterful in its own capacity.