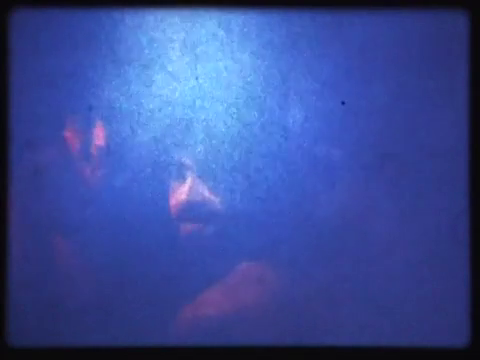 I have always had the utmost respect for a film that configures the space of eroticism as a dimly lit room. If I were to attempt to explain my thoughts on eroticism (or, slowly pronounce the French word one syllable at a time for maximum duplicity tying meaning to how the word is pronounced: er-o-tis-me), by way of movement, gesture, and image, what would be arrived at, formally, would be something similar to this film.

But I've said almost nothing of the film itself thus far:
three figures, all men, caress, lounge around, touch one another, move, in a room. Rephotographed images break the film apart and put together a fragmented visual representation of pure eroticism: hazy blues and red, slow & ennui-inspired movements of repetition, the blurring of bodies into a single visual form, the tactile grain of film. 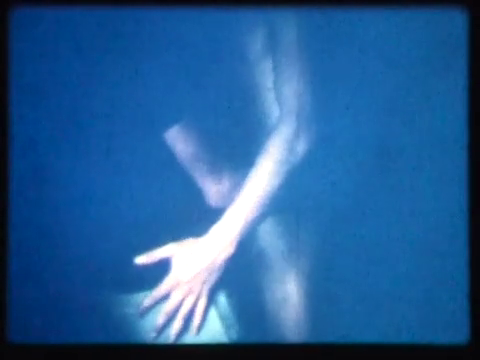 I'm tempted, here, to move into esoteric comparisons drawing on Tantrism or Kundalini to talk about what happens when watching this, if you can truly give yourself to the film, but I fear I'm not well versed enough in either to make the points I want to make. The entire idea, it seems to me, is that this explanation is already what the film is doing: something language itself can not do, which is present a conceptual space (instead of representing a conceptual space), especially one as mystical as the eroticism of the body.

Oftentimes the films that I find myself reacting most strongly towards are films where I find myself lost in the space of the film itself, "zoned-out" if you will. This estrangement happened here, often no easy task to accomplish when it comes by way of an entirely silent film I'm watching somewhere other than in a cinema (watched on my computer in the middle of the day, the noise of everyday apartment living often makes it easy to be distracted or removed from the film at hand).

It's unfortunate that this is seemingly the only film of Kut's that I can find mentioned of online, as whether it was intended or not it's something of a minor masterpiece.