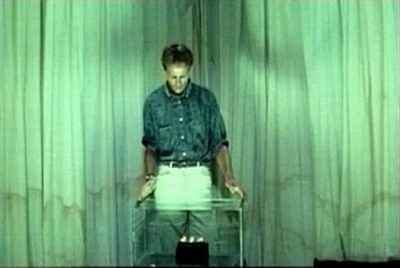 Almost every single time I watch one of Arrieta's films (because, for whatever reason I rarely watch his films in close proximity to one another) I'm reminded of how wonderful of a filmmaker he is. Even in its scraped-together, fragmented form, Grenouilles manages to hint at so many things that reveal this as an off-kilter masterpiece. But, perhaps the gaps are more important than what's there. The quality is shit on the Re:Voir DVD, but even in the tainted image there's such shocking beauty, the haze heightens it at times... narratively this is oblique pulp, but there are a few 'uncanny' details that make me think of Hadzihallilovic's Evolution; there's the sea, a glowing light, a closed off island, a desire to know something unknowable... Eva Ionesco is fantastic here, there's a scene shot at night underwater that is almost shocking in the way images appear on screen, there's so much beauty thrusting through the disorientation. If this had been finished it would have been an unquestionable masterpiece aligned with Arreita's other feature work, but in fragmented form it becomes something else; almost a wound begging to be filled...